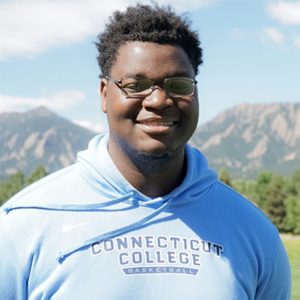 ACS-certified chemistry major Justin Nwafor won the prestigious Oakes and Louise Ames Prize for his senior thesis on fluorescent proteins that have recently revolutionized the fields of biological and medical science.

After working for two years in Professor Marc Zimmer’s lab, Justin launched an independent examination of three glycines found in jellyfish, corals and sea squirts. His findings will soon be submitted for publication in a peer-reviewed journal, with Nwafor as first author.

This fall, he began a post-baccalaureate research program at Johns Hopkins University before pursuing a doctorate in medicine and in philosophy.