A champion for voting rights got her start at Conn 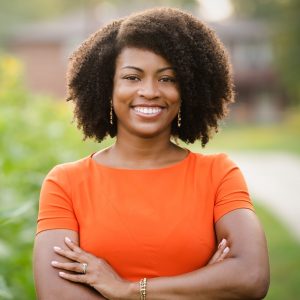 Chakena Sims Perry ’16 is a talented community organizer and voting rights champion who has garnered national attention for her work to expand political engagement and break down barriers to civic participation.

As the chair of the Cook County (Illinois) Young Democrats, the past board president of Chicago Votes Action Fund, and the founder of Black Millennial Renaissance, a network of Black millennials and their allies working to end systemic racism, Perry has worked tirelessly to make participation in the electoral process easier for people of color and young people.

“There are plenty of tactics that have been used over the years and are still being used today to disenfranchise people of color, from blatantly removing Black people from the voting rolls to voter ID laws that unfairly impact people of color,” Perry said. “And when it comes to the issue of whether incarcerated people and people with convictions should have the right to vote, that of course highlights the fact that Black people—particularly Black men—are disproportionately represented in our criminal justice system.”

Perry and her team have pushed aggressively for legislation that makes voting easier and more equitable on a fundamental level, such as online voter registration, same-day voter registration and automatic voter registration, all of which broaden access. She’s also worked on numerous projects, from partnering with the public system to register students to helping make the enormous Cook County Jail an actual voting precinct so that inmates awaiting trial can exercise their right to vote. For her efforts, she was honored with the 2020 Ainslie Alumni Achievement Award from the Posse Foundation.

Perry traces her intense passion for community engagement back to an internship with Chicago Votes, which she held as a student at Conn in 2013. She spent the summer knocking on doors in 90-degree heat, speaking with people throughout the city and encouraging them to register to vote.

“One day during that internship, I met a man with a felony conviction who said he had been told he couldn’t vote,” Perry recalled. “Something seemed off about that, so I looked into it, and it turned out that in Illinois, people with felony convictions actually can vote. That’s when I realized how misinformation is leaving a lot of important voices out of our democracy, and I wanted to do something about that.”